Glengoyne Distillery has announced the launch of Cask Strength Batch No. 007. It’s the first in their Cask Strength collection to feature a small proportion of bourbon barrels in the cask recipe, besides the usual first-fill American and European oak Oloroso sherry casks.

John Glass, Malt Master at Glengoyne Distillery, explains: “The bourbon parcel we used in the distillation of Glengoyne Cask Strength Batch No. 007 brought in a sweetness and a burst of vanilla, which adds a roundness and depth to this sherry-dominant whisky. The bourbon plays a light, but important, part in the overall cask recipe.”

According to Glengoyne’s tasting notes, this 7th batch boasts a fruity, malty flavour profile, featuring notes of cinnamon, orange, peaches and honey. Katy Macanna, Brand Manager for Glengoyne, adds: “Glengoyne Cask Strength Batch No. 007 has an intense burst of flavour, yet it retains the sweet and fruity character for which Glengoye’s collection of Highland Single Malt Whiskies is renowned.”

Glengoyne Cask Strength Batch No. 007 is bottled un-chillfiltered and natural colour at 58.9% abv, and retails at £59.99 per 70cl bottle. 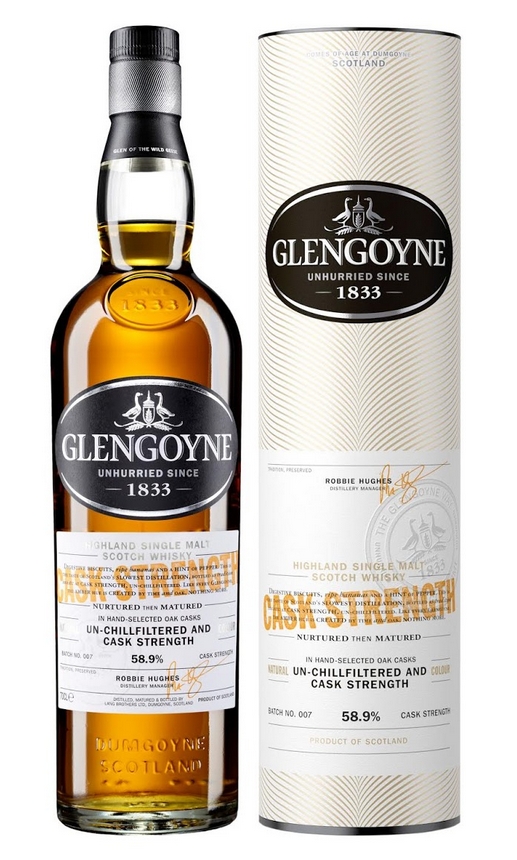